As with humans, a strong immune system is vital for fish to maintain good health. When the immune system is weakened, the body does not function well and one tends to be prone to illness. If so, recovering from illness is even harder.  Let’s take a look at a scientific approach to why this is the case.

To a large extent, the difference between good health and disease is about the ratio between the number of cells which work well, and those that do not. The cells have many functions, such as signaling, transporting, fighting, building and protecting, and the balance between omega-3 and omega-6 fatty acids is important for their ability to perform these tasks.

Where are they formed?

Only marine organisms are a rich source of long-chain omega-3 fatty acids. Omega-6s on the other hand are primarily formed in land plants. 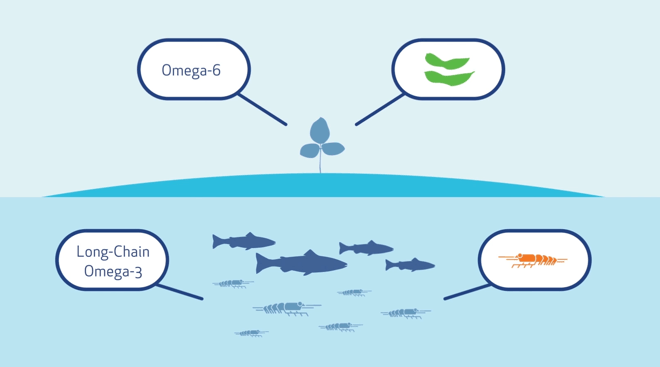 Omega-3s and Omega-6s have important but different jobs

The cell membrane is responsible for the ability of the cell to communicate with the surrounding world. It controls the passage of substances. Omega-3s contribute to the cell having a flexible and permeable membrane helping to give the right signals.

For optimal health and the capacity to resist disease, fish need a responsive immune system. Inflammation is the body's way of saying that something is wrong and that the immune system should start to fight the intruder, like a virus or infection.

Read more: Ensuring the low impact on the Antarctic system

In order to strengthen the immune system, the balance between the two fatty acid forms is decisive. Too much omega-6s can lead to more inflammation, whereas omega-3s have anti-inflammatory effects.

It is important that fish have access to both, but in order to manage inflammation and infection efficiently, they require the right balance.

Studies have shown that by eating krill, fish develop stronger heart muscles and healthier circulatory systems. This results in lower mortality and less disease, as well as improved fillet quality.

Krill for 4 Legged Athletes as Well as Fish and Shrimp

Aker BioMarine is dedicated to science, researching the effects of krill on humans, pets, farmed fish and shrimp. Across species, krill is proven to have beneficial traits for health and performance. One of the focus areas over the past years has been in dog mushing, where top trained dogs run some of the toughest sled dog races on the planet.

Look Out for Lipids

Adding an ingredient to feed formulations which contains omega-3s may seem like a simple recipe for success. But it really isn’t that easy, as not all omega-3s are equal. So, picking the right one is crucial and can offer a significant competitive advantage.

Why omega-3 fatty acids are essential to fish