Here are 10 reasons why krill meal should be an essential ingredient for your salmon feed.

The inclusion of krill meal means higher feed intake and growth after seawater transfer as well as higher growth in the grow-out stage, as shown in numerous studies. Quite simply, salmon likes the taste of krill. Reasons are attractants such as TMAO, nucleotides and other water-soluble amino acids (Hatlen et al., 2016).

Krill is a feeding attractant that prevents feed intake depression from plant-based diets. It even reduces feed depression during the seawater transfers (Zhang et al., 2012). 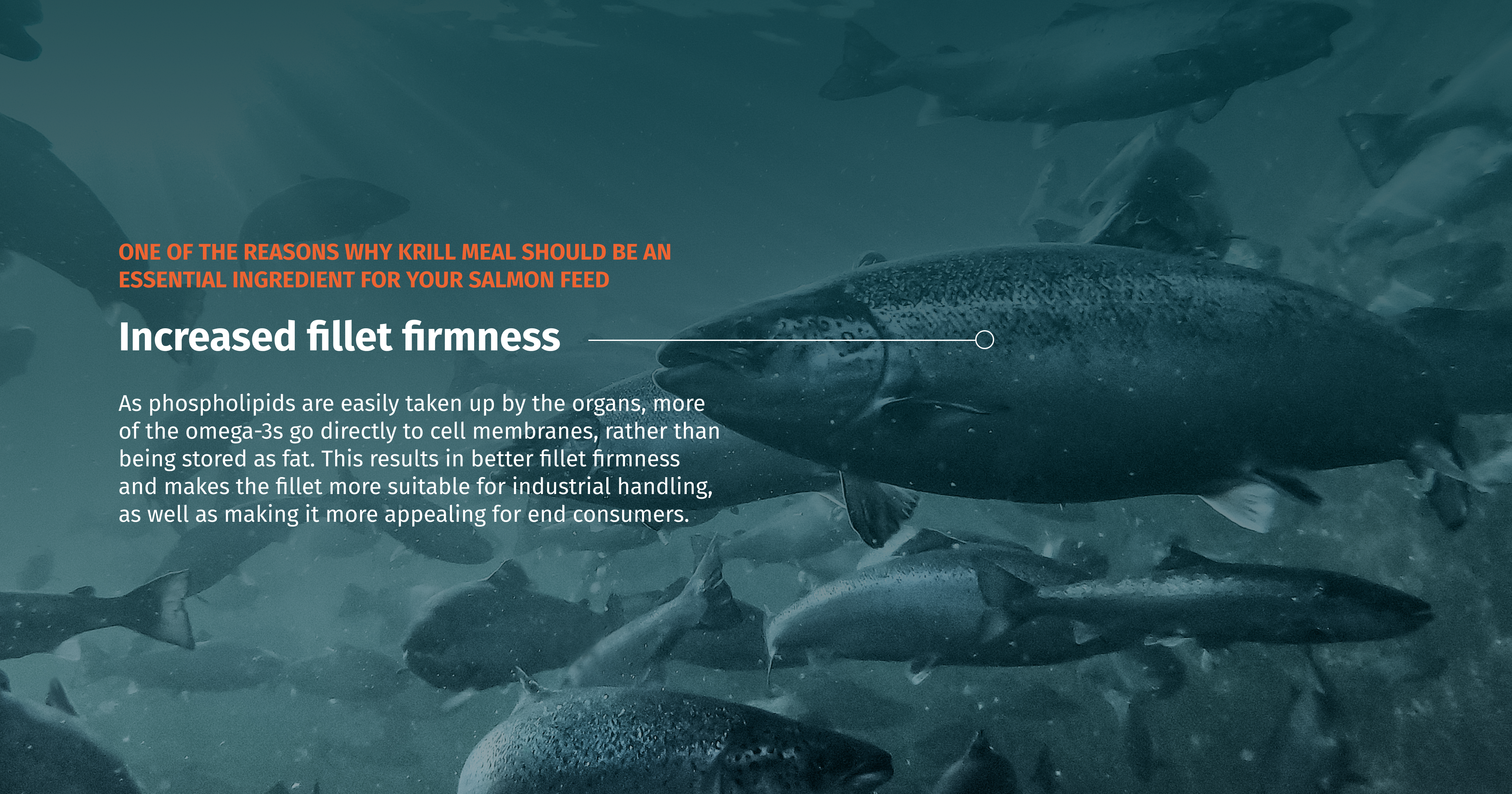 As phospholipids are easily taken up by the organs, more of the omega-3s go directly to cell membranes, rather than being stored as fat. This results in better fillet firmness and makes the fillet more suitable for industrial handling, as well as making it more appealing for end consumers (Hatlen et al., 2016).

The colour of fillet from salmon fed dietary krill meal is even and has a nicer pink colour, which consumers prefer. Krill contains astaxanthin, a natural antioxidant, which in addition is also a natural source of pigmentation and provides fillet the nice pink colour (Mørkøke et al., submitted).

8. Less fat accumulation in the fillet

Krill meal reduces fat deposition in fillets. This is due to the phospholipids in krill meal that influence the lipid transport and deposition in fish organs (Hatlen et al., 2016; (Mørkøke et al., submitted). 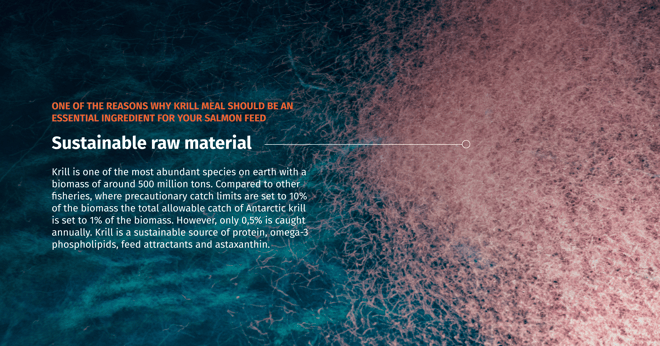 Krill is one of the most abundant species on earth with a biomass of around 500 million tons. Compared to other fisheries, where precautionary catch limits are set to 10% of the biomass the total allowable catch of Antarctic krill is set to 1% of the biomass. However, only 0,5% is caught annually. Krill is a sustainable source of protein, omega-3 phospholipids, feed attractants and astaxanthin. 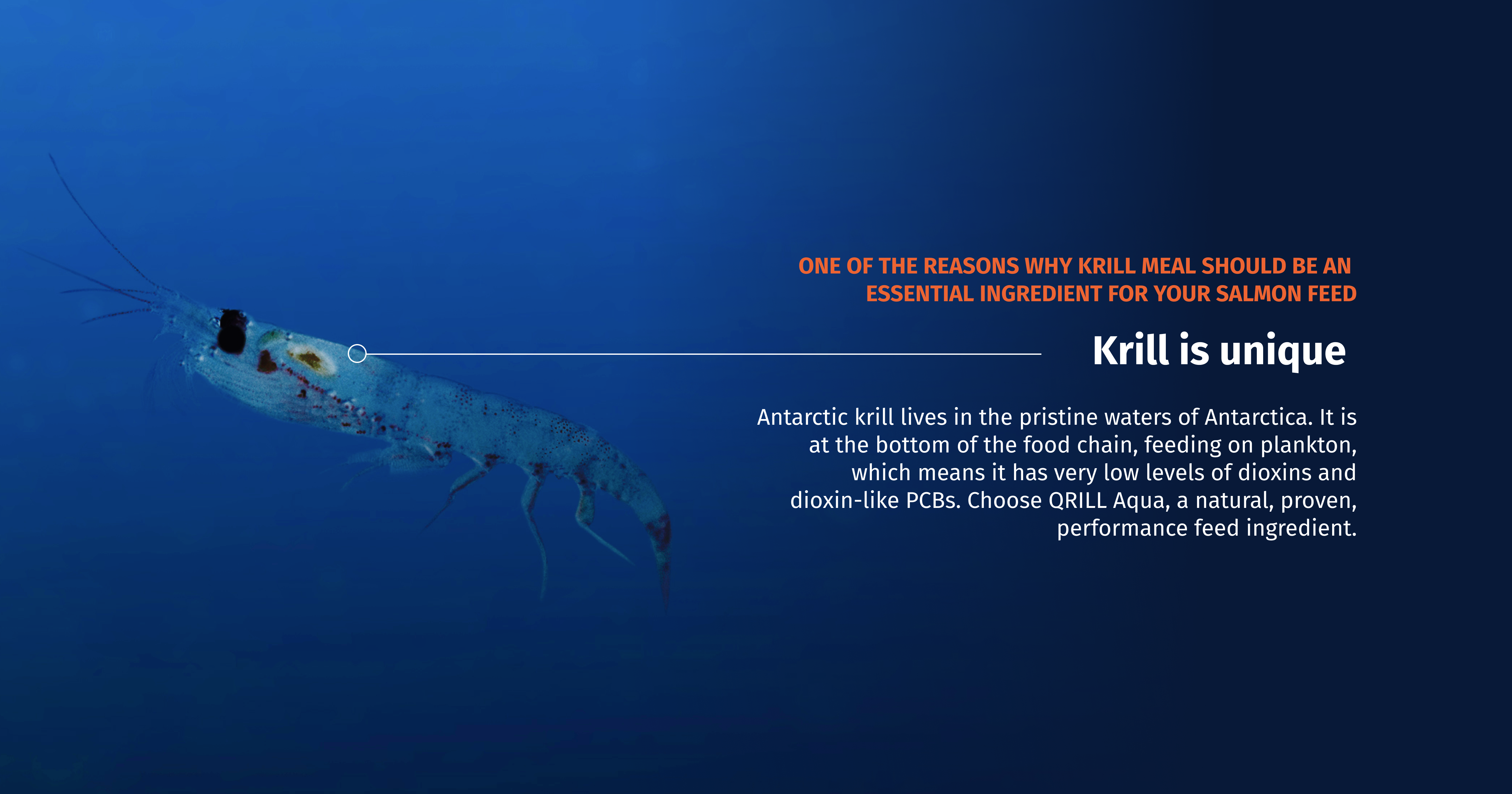 Antarctic krill lives in the pristine waters of Antarctica. It is at the bottom of the food chain, feeding on plankton, which means it has very low levels of dioxins and dioxin-like PCBs. Choose QRILL Aqua, a natural, proven, performance feed ingredient.

Click on the button below to get more research and documentation on the effects of krill feed inclusion on different fish species.

QRILL Aqua in 2022: a year of discovery, engagement, and growth

The QRILL™ Aqua team was in full swing in 2022, sharing new knowledge about krill, engaging with aquaculture customers and partners around the world, and even expanding its presence as QRILL Aqua demand grows around the world.

Sustainability and optimization in focus at the Patagonic RAS Chile

Aker BioMarine, a conference sponsor, shared insights on how Antarctic krill is a sustainable solution for the evolving aquaculture industry.

Salmon prefer krill and thrive when it’s in the feed

Salmon eat more feed when served krill Krill is found in all the world’s oceans, making it a natural food choice for fish. This tiny crustacean is perfectly composed of important nutrients, like proteins, fats and vitamins ensuring that the fish are properly nourished so that they grow to be healthy and more resilient. In addition, krill has a natural special effect: it contains several substances that attract salmon and makes them want to eat more. Various attractants, such as nucleotides, water-soluble amino acids, and the substance TMAO, all affect receptors in the mouths and noses of salmon and stimulate their need to feed.