NEW Study: Researchers at Labomar, the Marine Sciences Institute in NE Brazil, published a new study that tests the digestibility of shrimp feed ingredients derived from aquatic sources, as well as plant and animal byproducts.

May 18. 2022: In a new, independently conducted study from leading university aquaculture research teams in Brazil, scientists evaluated the digestibility of crude protein and essential amino acids in ingredients for Pacific whiteleg shrimp diets. One of the test diets in the study included krill meal provided by Aker BioMarine.

The feeding trial ran over three experimental stages, each lasting up to 30 days. The test diets included a range of plant and terrestrial animal byproduct ingredients, as well as aquatic ingredients, such as marine fish meal, salmon byproduct meal and krill meal. Following the experiment, the scientists concluded that the aquatic ingredients yielded higher crude protein and essential amino acid digestibility, making them the more effective additives to shrimp feeds. 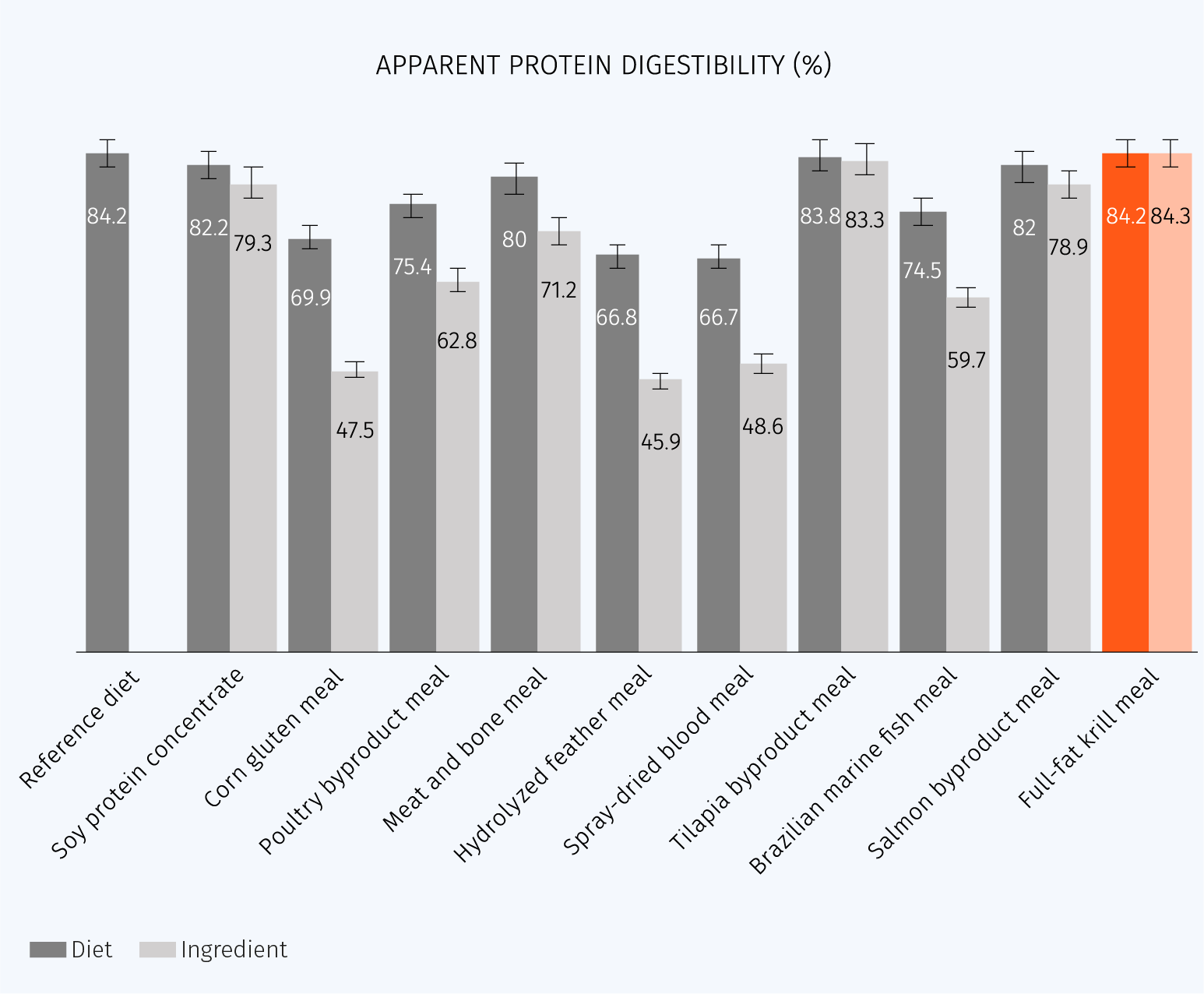 “Protein ingredients can be costly for shrimp farmers, and the shared goal is to use ingredients that are as effective as possible, a motivation that prompted this new study,” says Lena Burri, R&D Director, Aker BioMarine. “While we did not participate in this experiment from a research perspective, we supplied the krill meal to the team, and it was shown to be the highest performer among all ingredients tested.”

“This study has shown that protein and amino acid digestibility of raw materials have a greater importance than their crude values and should be carefully considered during ingredient selection and feed formulation. We see that aquatic protein sources and krill meal specifically have proven to increase feed efficiency and growth performance of juvenile shrimp, which will likely have direct implications to water quality and economic performance of shrimp farms,” says Dr. Alberto J.P. Nunes from Instituto de Ciências do Mar (Labomar), Brazil.

More information about the digestibility experiment

The published study is titled “Apparent digestibility of protein and essential amino acids from commonly used feed ingredients in Brazil for juvenile shrimp Litopenaeus vannemei” and was part of the M.Sc. thesis of Ms. Carolina Vieira. The work was supervised by Professor Alberto Nunes. Other co-authors included Drs. Ricardo Pinto and Alexandre Diógenes.

QRILL Aqua in 2022: a year of discovery, engagement, and growth

The QRILL™ Aqua team was in full swing in 2022, sharing new knowledge about krill, engaging with aquaculture customers and partners around the world, and even expanding its presence as QRILL Aqua demand grows around the world.

For the first time ever, Aker BioMarine will attend AQUA EXPO 2022, (Guayaquil, Ecuador, from October 17-20) to meet with experts from across the aquaculture industry. Ecuador is the world’s number one producer and exporter of whiteleg shrimp, highlighting shrimp farming as a key topic at the conference.