You might have heard of krill and even some of the studies showing its qualities for aquaculture, but here are some lesser-known fun facts.

One might not see krill very often, but this tiny shrimp-like creature is actually found in all of the world's five oceans. This means that fish naturally feed on krill. Maybe this is why they love the taste so much? Although krill is present in all oceans, they only swim in big swarms around Antarctica.

Biomass is defined as the mass of living biological organisms in a given area.  The total weight of the krill biomass is around 500 million metric tons, which is twice the size of the human biomass. Krill is therefore among the species with the largest biomass on earth, and krill swarms are even visible from space! 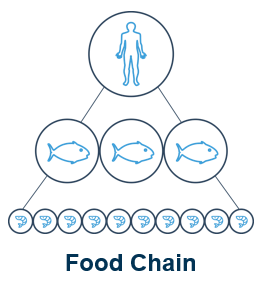 With such a tremendous biomass, krill is a sought after meal for whales, penguins, birds and fish. It is therefore great that the female krill can lay up to 10 000 eggs at a time – sometimes several times a season.

Low in the food chain

Krill is defined as a zooplankton. They eat phytoplankton or algae during winter which is at the very bottom of the food chain. All other species in the oceans eat krill or species that feed on krill, meaning that krill is vital for life.

In the 1960's and up until 1990 the Soviet army was fed on krill. The Soviet Union had several boats in the Antarctic Ocean with a sole military purpose: to feed their army. The Soviets knew that krill has amazing nutritional qualities beneficial to the tough lives of the soldiers. The krill was, as sardines, canned in small metal boxes making them last for a longer time.

To learn more about the qualities of krill, click here or download our booklet to read more on the benefits of krill for fish farming.

What Europe wants to know about krill: The top 5 questions

We often see that our customers and partners have the same questions when it comes to krill and our products. This article explains the most common questions our European operations get and the focus is largely on marine fish and how QRILL Aqua can impact their diet. Keep reading to find out how Aker BioMarine answers its most common European inquiries.

Why we trust the Blue MSC label

One of the cornerstones of sustainability in Aker BioMarine is our Marine Stewardship Council (MSC) certification, which is by far the most comprehensive third-party certification for fisheries and chain of custody sustainability.