Antarctic krill (Euphausia Superba) is one of the most abundant species on earth, with an estimated biomass of around 500 million tons. They are shrimp-like in appearance, with an average body length of only 5 cm, with big black eyes and a reddish semi-transparent shell. They live in all oceans around the world, but can be found in huge swarms in the icy cold waters of the Southern Ocean, where they are harvested from the wild.

Krill are considered an important trophic level connection – near the bottom of the food chain – because they feed on phytoplankton and (to a lesser extent) zooplankton, converting these into a form suitable for many aqua species and larger animals. This special crustacean holds a vital position in the marine food chain.

THE MAGIC OF KRILL

Krill is a sustainable source of protein, omega-3 phospholipids, feed attractants and astaxanthin. 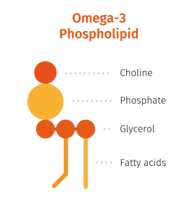 Want to understand the difference between phospholipids and triglycerides? See short film below:

QRILL Aqua is prepared from an extract of ground whole Antarctic krill that is cooked and dried, resulting in a brownish-orange powder containing around 60 percent protein with a nutritionally well-balanced amino acid profile. It is a sustainable source of protein, omega-3 phospholipids, feed attractants and astaxanthin. The benefits of including this ingredient in aquafeeds are many.

or read "Why omega-3 fatty acids are essential to fish" here.

Omega-3 triglycerides can be used by the body as an energy source or are stored as fat. For that reason a smaller omega-3 amount will go to membranes. The phospholipid form is easily taken up by the organs, giving fish more omega-3s in their cell membranes, resulting in improved health and fillet quality.

Antarctic krill - a sustainable protein source for fish and shrimp