Krill for 4 legged athletes as well as fish and shrimp

Aker BioMarine is dedicated to science, researching the effects of krill on humans, pets, farmed fish and shrimp. Across species, krill is proven to have beneficial traits for health and performance. One of the focus areas over the past years has been in dog mushing, where top trained dogs run some of the toughest sled dog races on the planet.

A team that has been highly involved in our studies, is that of Thomas Wærner, with team Berserk. He started feeding his dogs QRILL Pet in 2017 and does so to this day. Thomas participated in his first Iditarod in 2015. A race which takes place in Alaska that is hands-down, the toughest long-distance sled dog race for mushers and their teams. Thomas & Co managed to finish in 17th place, which earned him Rookie of the Year. Ever since then he wanted to go back and prove himself, this year he did.

A key component which will have the dogs running all the way to Nome is an ideal feed. Krill contains some of that little extra, which I believe can contribute to winning the race.

Thomas Wærner, prior to the Iditarod race.

Through our dog mushing initiative, we have been able to conduct several studies on sled dogs, to get a better understanding of the effects krill has on the top athletes of the dog world.

You might wonder how farmed fish and shrimp relate to sled dog performance. Well, we all want to perform in one way or another, sled dogs, humans and salmon alike. The connections are in fact more related than what one might think. Nutrition plays an important role and positive krill effects have been identified across species.

The reasons are several folded, but essential are the omega-3 phospholipids in krill and their ability to be used efficiently in cells for all species. A fact is that the phospholipids are easily taken up by the cells and immediately come to use without loss of energy for other purposes.

Phospholipis in krill go directly into the cell membranes and are important building blocks for all species:

Omega-3 phospholipids from krill has proven to reduce inflammation and muscle damage after races. Some inflammation and muscle damage are expected after such tough strains, but a study conducted during Iditarod 2016 showed that sledge dogs having 8% krill meal for 5 weeks before the race alleviated these symptoms. The dogs that did not receive krill meal, had a 4 times increased CRP levels after the race, whereas in the krill dogs it was reduced to a 3 times increase. The reduced inflammation was reflected in reduced muscle damage in the krill dogs, which was measured by plasma creatine kinase levels.

I believe krill provides my dogs with the X-factor, even after just a few weeks on krill I could see a big difference in my dogs.

Also, fish and shrimp benefit from krill in order to be more robust and to handle stress better. They are at times exposed to water changes and treatments which again can lead to poor appetite. It is of importance that they have a well-functioning immune system prior to these demanding situations and to receive a feed that stimulates their appetite. Their high stress tolerance and robustness are of great value to their health and performance. In the end, it also shows clear benefits for the finished fish and shrimp products by improved fillet quality and flavor, which again is positively related to the price farmers can charge for their products.

So, for those who did not know that dogs running in sub-zero degrees in Alaska could have things in common with anything marine, this might perhaps surprise. We will continue to devote time and research to look deeper into how krill can be beneficial also across species.

Read more on the topic here. 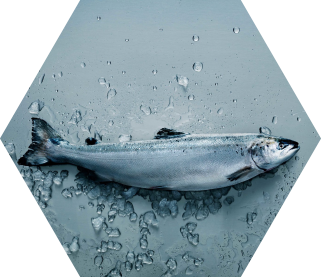