Krill is an important source of protein, omega-3 fatty acids and feed attractants which makes it a great ingredient in feeds for shrimp. Research is constantly done to learn how its dietary inclusion can give the best results. Late 2019, a study concluded that krill in fishmeal-challenged diets resulted in:

The Labomar scientists started out with a baseline diet of 3% fish meal, which was supplemented with either 3% krill meal, squid meal, shrimp head meal, squid liver meal, salmon meal (positive control diet), soy protein concentrate, or liquid sardine hydrolysate (5%). All of these ingredients are considered to be chemoattractants, meaning they induce or attract the shrimp toward it.

The shrimp in the study were fed their respective diets 10 times per day for 74 days. Following the feed trial, they were counted, weighed and their growth performance and feed efficiency were analyzed. The scientists also evaluated feed preference among the shrimp, by offering the shrimp two diets simultaneously in two separate feeding trays, evaluating which feed was the preferred choice. 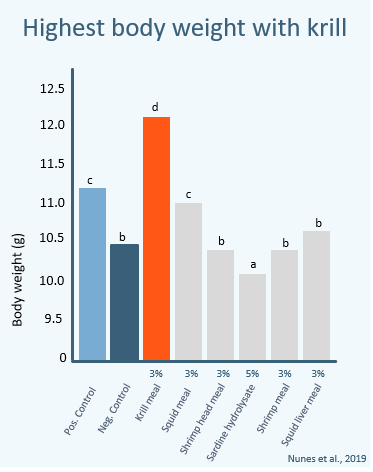 Overall survival of the shrimp was unaffected by the various diets, though the highest gained yield resulted from diets containing krill meal and salmon meal. The scientists also reported that the lowest feed conversion ratio (FCR) was among the shrimp fed the krill meal supplemented diet, showing the efficiency of krill meal in the shrimp diet. 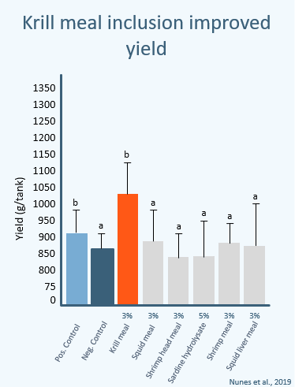 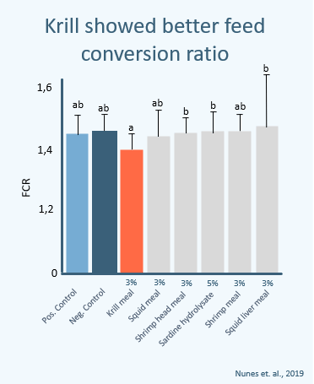 Also read our blog post: 7 reasons to include krill in your shrimp feed

In this study, the scientists found that the shrimp preferred the shrimp head meal diet over the krill meal diet, in a side-by-side comparison. However, this preference did not lead to greater growth among the shrimp fed the shrimp head supplemented diet. One of the possible reasons for this result is the presence of cadaverine, putrescine and tyramine in the shrimp head and shrimp liver meal. These biogenic amines may have compromised the nutrient quality of the feed, which affected the overall growth.

When fish meal in shrimp diets is low, krill meal is a powerful addition

The final results of this study had one very clear result: krill meal was the most effective in increasing body weight, final yield and in reducing FCR. These attributes of a krill meal diet can prove quite beneficial to a shrimp farm, as increased growth can improve production efficiency. The shrimp grow bigger, faster and more of them survive, resulting in an earlier harvest and greater crop turnover for farmers.

The quick turnover also reduces the risk for disease occurrence among the shrimp. The Labomar scientists concluded that krill meal showed a unique balance of higher feed attractiveness and stimulation, coupled with a steady supply of dietary nutrients, which no other ingredient in this study was able to match.

Learn more about the highly attractive feeding stimulant for shrimp feed, by downloading our whitepaper below.

The top 5 most asked questions about krill in Southeast Asia

We asked the krill experts in our Southeast Asian operations about the most common questions they get. They said that most people want to know how krill can benefit shrimp and marine species diets, particularly in Thailand and Vietnam. Keep reading to find out how Aker BioMarine answers its most common Southeast Asia inquiries.

While previous studies confirmed the stimulating effects of astaxanthin krill oil on Pacific whiteleg shrimp juveniles, little is known about its effect on shrimp in the post-larval stage. A new study from Instituto de Ciências do Mar, Brazil (Labomar) and Aker BioMarine aimed to remedy this knowledge gap, analyzing how astaxanthin krill oil impacts the shrimp during this intermediary growth stage.