Aker BioMarine’s new supply ship has been in Europe for the first time, and offloaded QRILL Aqua meal in Bremen and in Haugesund. The cargo that was on the ship is enough to cover the demand from European fish farmers for the rest of the year.

Antarctic Provider was built in China during the corona pandemic. It has been operating one season in the Antarctic, and Aker BioMarine decided to bring the fully loaded ship to Europe when this fishing season came to an end. In addition to going through scheduled maintenance and upgrades, the reasoning for bringing the ship to Europe has to do with the very difficult supply situation globally after the corona crisis.

- It has been major delays in the traffic of containers all over the world the last months, causing huge distribution and supply problems for a lot of industries and companies. Antarctic Provider was fully loaded with QRILL Aqua meal which secures the supply for all of Aker BioMarines customers in Europe for the rest of the year.

We are very happy to be able to offer a predictable situation for our customers because it is especially important in a situation where many companies experiences delays and delivery problems partially due to the corona pandemic, says CEO of Aker BioMarine, Matts Johansen.

By doing this, Aker BioMarine serves all its European customers for the rest of the year, when it comes to their demand for krill meal as an ingredient in the feed for fish in European farms. 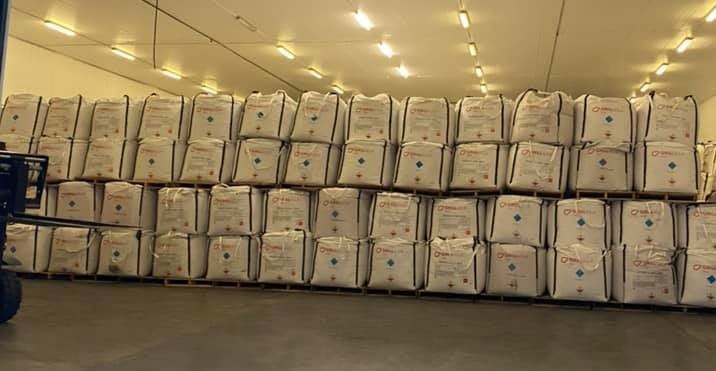 Antarctic Provider usually brings crew, provisions, and krill products between Aker BioMarines fishing vessels in Antarctica and the hub in Montevideo in Uruguay. This year it was decided to bring the ship to Europe, where it has been at different harbors for the last 2-3 weeks, for offloading krill meal, and for scheduled maintenance in Haugesund in Norway.

Aims to be CO2 neutral

Antarctic Provider is one of the most sustainable and efficient ships in the world in its class. The ship is packed with new technology, that makes it possible to cut fuel consumption and emission of CO2 substantially. The engine runs on diesel, but it is the most energy efficient in the world and it is convertible to the green energy of the future.

- The last ten years we have cut our CO2 emissions in half, and we aim to do the same all over again in the next ten years. In the long run, our vessels shall be CO2 neutral. Antarctic Provider can be upgraded to for instance green hydrogen or ammonia, when production and infrastructure exists, says Johansen.

Antarctic Provider costed 560 million Norwegian kroner to build. The ship is 168 meters long and has four cargo departments with a total capacity of 40.000 cubic meters. The ship was delivered from the shipyard in China earlier this year, on time and on budget, and was operating in a very satisfactory way during this fishing season. It is built to withstand the most extreme climate and weather conditions on the planet, in a sustainable way.

- Antarctic Provider uses 60 percent less energy per produced unit than our old supply ship. Our new ship has more than twice as much capacity, so that it needs to go much fewer times between Antarctica and Montevideo, says Johansen.

On and off loading is also munch more efficient, and that opens for more days of fishing and less days dealing with logistics.

The US salmon farming industry can now benefit from the proven health and nutritional benefits of krill. As of June 10th, the Food and Drug Administration (FDA) has approved QRILL™ AQUA and QRILL™ High Protein meal for use in salmon feeds.

Virginie Claeyssens, Director of Sales for QRILL Aqua (EU) discusses the upcoming Aquafuture Conference and what the QRILL Aqua team is most looking forward to while in Spain.

Learn more from the QRILL™ Aqua team (Booth #B248)